Members of Gateshead Local History Society have been researching soldiers who died during the First World War.  They are currently recording graves in Gateshead East Cemetery and researching family history records.

They are compiling maps to show the streets where the soldiers lived in Gateshead and would love to hear from anyone who has a family relative from Gateshead who died during the First World War, or if you have any photographs you could share.

If you have any information or would like to get involved please contact us at gatesheadlhs@gmail.com or call us on 0191 4776924.

Some of the research undertaken by the group will be added to the North East War Memorials Project website.

The First World War had a major effect on Gateshead with many men rushing to join either the Durham Light Infantry or the Northumberland Fusiliers. It wasn’t long before Gateshead experienced the sight of wounded soldiers many of whom  were housed in the local wartime VAD hospitals established, firstly at Whinney House and later at Saltwell Towers. Sadly, burials of men who had died as a result of injuries at home were a continuing feature throughout the war as the number of war graves can testify in Saltwell and Gateshead East cemeteries.

After Gateshead had settled back to peace conditions, plans were soon made for a war memorial to commemorate the fallen.  1700 Gateshead men had been killed of which 986 had served in the 9th battalion of the DLI (nicknamed ‘The Gateshead regiment’ – a battalion which gained more individual honours than any other unit in the British army). It was decided to erect a cenotaph at Shipcote. The designer was John W Spink and it was built using Heworth Blue stone by Alexander Pringle of Gateshead at a cost of £5,500 with all the money being raised through public subscription.

The cenotaph was formally unveiled on 14 May 1922. 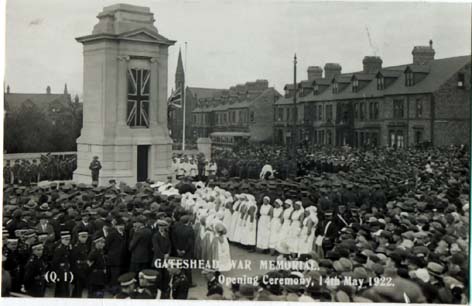 One of Gateshead’s many casualties was Richard Dellow, the son of a Gateshead dentist. He enlisted in the 18th Northumberland Fusiliers during October 1914, was soon promoted to sergeant and went overseas with the regiment in January1916. He was awarded a commission for gallantry after the battle of the Somme and later transferred to the 19th Fusiliers. He was invalided home in November 1917 with trench fever and died in a Newcastle private hospital on 8 July 1919. He is buried in Gateshead East Cemetery.

Contact us for more information
We only use cookies for logged in users and analytics. They don't store personal data and are deleted when your session ends. If you continue using this site we'll assume you're ok with that.Ok