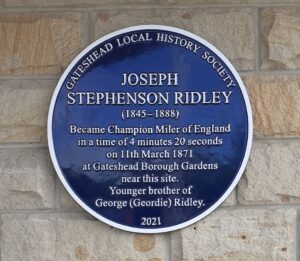 Matthew and Frances were married on 26th September 1830 at St Mary’s Church in Gateshead. Between them they produced eleven children, all of whom were born in Gateshead. Ten survived into adulthood. Little is known about Joseph’s personal life but through census returns we can identify where he was living.   The only other source of information about his life are newspaper articles but these only give descriptions of his time in pedestrianism and other sporting circles. What is known is that he was baptised at St Mary’s Church Gateshead on the 24th August 1845.  On his baptism certificate his birth date is given as 29th July 1845.

He is mentioned on all four census returns which were taken during his lifetime, although on each one he was referred to under different forenames.  These names can all be verified as true by comparing each census with the others and referring to his parents and siblings.

From the four censuses taken during his life time it is known that he lived at the following addresses:

These returns also state that he worked variously as a coney (rabbit) cutter, hatter and labourer.

Joseph Stephenson and his older brother George became famous for very different reasons, George was the third child, born on 10th February 1835. He became a writer of poems and local songs, including the Geordie anthem “Blaydon Races” and other northern ditties, but strangely he did not become famous until many years after his death.   However, his brother Joseph Stephenson Ridley, (his middle name being his mother’s maiden name) became famous during his life time for his prowess at running, referred to at the time as pedestrianism.

Pedestrianism, initially, had referred to races which involved competitive walking, and involved betting.  The description eventually developed to include running races.  According to journals published in the 1860 – 1870’s large crowds assembled to witness these events, some just to watch but others to wager.  His first big win was in 1865 when he beat J. Corbett in a race of two laps at Fenham Park Grounds for £30.  Over the next five years he had varying degrees of success in short races such as the 880 yards but his real strength was over the one mile or greater length races. Large sums of money were awarded to the victors in the most important races, with prize money usually put up by wealthy businessmen or bookmakers.  £100 was awarded to Joseph Stephenson Ridley as the winner of the One Mile Championship of All England.  It appears that Joseph Stephenson Ridley not only ran foot races (pedestrianism) but also refereed races. His career mainly spanned the years from 1868 to 1874, but there is a record of him racing in 1865.

An article in the Newcastle Journal of 1873 on pedestrianism refers to the sale of tickets for an event as follows:

“For particulars see bills. Entries with J. Thomson, Ellison Arms, Park Lane; G. Guthrie, Cobden Inn, Chandless Street, Gateshead; or J. S. Ridley, at the grounds”.  The grounds in question were Gateshead Borough Gardens, and it appears that as he was tasked with handling cash, he must have been well trusted.

His greatest achievement was winning the Championship of All England for the mile when he beat the famous J. Fleet from Manchester convincingly at Gateshead Borough Gardens on 11th March 1871. His time was 4 minutes 20 seconds. It would be more than eighty years before the four minute mile was broken. It makes you wonder what sort of time would have been achieved if he had been wearing modern day equipment and running on the tracks of today.

For his success he was awarded a silver belt the whereabouts of which is unknown, although according to some newspaper articles it was supposed to be on permanent loan to the Shipley Art Gallery, Prince Consort Road, Gateshead.  In the archives of that establishment, an oil painting of Joseph Stephenson Ridley is currently on permanent loan.  It was donated by Richard Ridley Jr., 1922 – 2007, Joseph Stephenson Ridley’s grandson, to be kept permanently by the gallery for the people of Gateshead.

Sometime during 1870 he won a gold belt which has now disappeared. The date of his winning the belt is unknown, as is its fate, but it is known that he won it at Manchester. This belt is not to be confused with the belt he won for the Championship of All England. During his career there are newspaper articles which report him as having competed at the Royal Patent Gymnasium and Powderhall in Edinburgh, and in Sheffield, London and Manchester. It seems he would perform other duties at Gateshead Borough Gardens when he wasn’t running, such as pistol firing and even refereeing dog races and rabbit coursing.

On 8th May 1871 Joseph married Janet Ann Hetherington, 1851 – 1916, at St James Church Gateshead. Together they had eight children.  Tragically, he died at the young age of forty four on the 9th August 1888 whilst living at 27 Tent Street Gateshead. His widow Janet Ann would outlive him by 28 years dying in 1916.

One of his grandchildren Richard Ridley Jr., along with local historian Joe Armstrong and representation from Gateshead Council, located the unmarked grave of Joseph Stephenson, and that of his brother George, in Gateshead East Cemetery. They also arranged with Gateshead Council to have a headstone erected for each.   These were erected with ceremony in 1988 and was such a local attraction that there was coverage from both ITV and BBC Television local news companies.

In 1995, the Gateshead historian Joe Armstrong wrote in a letter to the editor of the Newcastle Evening Chronicle, that a statue should be built in Gateshead to commemorate Joseph Stephenson and his brother George. He campaigned for this over a number of years and also suggested that there should be a display somewhere to show off their respective talents.  But alas, as we know, his efforts were to no avail.

← Robert Stirling NewallWednesday 12 October 2022 2.00pm ‘The Curious case of the Countess of Derwentwater’’ by Susan Lynn →