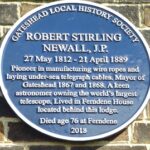 Our second blue plaque was erected to Robert Stirling Newall and was unveiled by the Deputy Mayor of Gateshead, Councillor Jill Green on Saturday 21 April 2018.

Robert Stirling Newall was born and brought up in Dundee and became an engineer. In 1840 he formed a partnership with Charles Liddell and Lewis Gordon and opened a factory in the Teams, Gateshead to produce wire rope using a new method patented by Newall.

As well as making cables the company started to lay underwater cables. In September 1851 they successfully laid a cable from Dover to Calais. In 1877 Newall supplied the wire rope that was used to bring Cleopatra’s Needle to London from Egypt. He was Mayor of Gateshead in 1867 and 1868.

Newall was a keen astronomer, and commissioned Thomas Cooke to build a telescope for his private observatory at Ferndene (now demolished). The 25 inch refracting telescope that resulted was, at the time, the largest of its kind in the world and had a tube nearly 30ft in length. King Leopold II of the Belgians visited Ferndene to see the telescope as did many others. In March 1889 Newall offered the telescope to the University Observatory in Cambridge where his son Hugh Frank Newall later became the first Chair of Astrophysics. In 1958 the telescope was donated by Cambridge University to the Athens Observatory.

The plaque is located on Ferndene Lodge on Saltwell Road. Please respect the privacy of the owners when viewing.