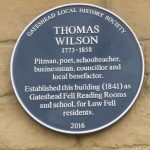 Thomas Wilson was commemorated on our first blue plaque which was unveiled by the Mayor of Gateshead Councillor Allison Thompson on Thursday 30 March 2017 and is located on The Bank, Low Fell.

Thomas Wilson has been called “The modern boast of the parish”. This was no idle statement as Wilson truly was central to Low Fell’s development as a desirable 19th century suburb. Of very humble origins, Wilson worked in the local collieries, probably as a trapper boy, from the age of 8. Uneducated, as he grew to adulthood he wanted to improve himself and began attending classes after work in Samuel Barrass’s small school near what is today Engine Lane. Keen to learn, in 1807, he was able to apply for a position as a clerk in the counting house of William Losh. He would never return to the coal mines.

In 1809, Wilson went into partnership with Losh and Thomas Bell to begin a new venture – an ironworks in Walker. In 1827, Losh, Wilson and Bell installed a rolling mill and the same year they were listed in a trade directory as steam engine manufacturers. In 1849, the firm were sub-contractors for the new High Level Bridge.

As Wilson prospered, he returned to his roots in Low Fell and built a new house – on the site of where Lowrey’s Lane car park is today. He became an Alderman and had many interests including writing dialect poetry. But perhaps Wilson’s most important achievement from a Low Fell point of view, was to establish the Institute on Durham Road. Designed by Thomas Oliver and built by a local builder Thomas Liddle, this building was a Low Fell landmark. Inside was a school, a reading room, and a library. The first event held here was a dahlia show on 2 October 1841 which attracted large crowds. Unfortunately, after Wilson’s death in 1858, the Institute gradually lost popularity becoming a “British Workman” (a temperance bar), a working men’s club and then for much of the twentieth century, a bank, and now a restaurant ‘The Bank’.